Blanca Bosquez holds a picture of her son while at a meeting with her son’s public defender, Ross McMahon, and De-Bug organizer, Gail Noble. Photo by Charisse Domingo.

(Thanks to Equal Voice News, New America Media, Truth Out, LA Progressive, San Diego Free Press, and Life in the Law for running this piece.)

Spiegel’s poem is an outpouring of the heartache and frustrations of his occupation – how he is forced to bear witness to, and at times feel complicit in, the damage of mass incarceration.

END_OF_DOCUMENT_TOKEN_TO_BE_REPLACED 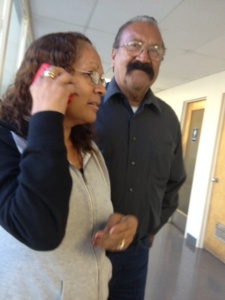 Congrats to this ACJP family who won their loved one’s release from a life sentence after 19 years through Proposition 36 re-sentencing at the beginning of the year. Then, just weeks after his release, and his successful re-integration into the community, the DA’s office from Stanislaus County filed a motion for the court to re-consider its’ decision to release him. So despite the courts decision, the DA’s office wanted to bring this man back to prison for the rest of his life. His family and attorney made a compelling argument as to why bringing him back to prison was both unlawful and unreasonable. And so, he won his freedom, again — beating a life sentence — twice. (In photo, Mary calls family members to them them know the good news. To see more on their story click here)

Our friends at the Prison Policy Initiative have just put out a new briefing called “Mass Incarceration: The Whole Pie.”   It asks and answers a fundamental question: How many people are locked up and where? The image aggregates the disparate systems of confinement in the United States and is a compelling (and disturbing) data canvasing of systems, charges, and reach of the incarceration machinery. (Click image to go the full depiction.)

Some people come into our ACJP/De-Bug community right on time. The previous week of this photo family came to our meeting looking for support to guide their currently incarcerated loved one through the parole hearing process. Our families began looking for resources and strategizing. Then this week this gentlemen walks in (in photo), humbly, and says, “I got out 20 days ago from doing 34 years…I don’t want all that time to have been for nothing.” He actually won his parole from an otherwise life case due to his tremendous work inside, even starting programs in prison, but then Governor Schwarzenegger denied the parole. He won his parole again later, and it was granted by Governor Brown. He is now going to be a resource for our families who have loved ones up for parole, advising them through the process. It takes some folks a while to connect with our families, but when they do — it’s right on time. (You can see more instagram shots of De-Bug’s ACJP in action using the hashtag #debugscience and #timesaved)

Thanks for Colorado Law School for Skype chatting with us about how De-Bug and our friends (the FIRE Coalition) were able to win the most progressive immigrant detainer policy in the nation. Hoping other communities fight ICE’s attempt to use our local courts and jails for their delivery system into deportation. 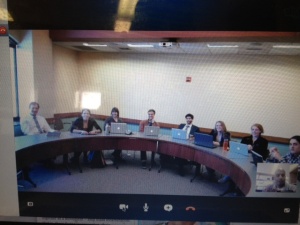