We recently had the opportunity to travel to a historic touchstone of the civil rights movement — Montgomery, Alabama — to work with and train six public defender offices in producing social biography videos to reduce charges and sentences. Some of the participating offices are brand new, born from a call from the community to create public defender offices in order to better protect the rights of the indigent, while others have had decades of history of advocating in the courts. We are excited to equip these offices — long-standing and new — with this tool as they advocate for justice for their clients. Here are some flicks, from our great connection in the South!

Jean sharing the concepts of how to tell a family story for the courts.

END_OF_DOCUMENT_TOKEN_TO_BE_REPLACED

The police killing of Michael Brown has sparked outrage across the county, and protests in North St.Louis. An understanding of the context of the police dynamics, community, and the political realities of the area can give a fuller picture to the images America is seeing on social media and on their television screens. De-Bug was in North St. Louis just weeks before the shooting of Michael Brown to do a social biography video for a capital case, and captured photos that tell a story of police power, political corruption, and a community left to fend for themselves.

In a neighboring town to Ferguson, called Pine Lawn, police are perceived by many as an armed force of a corrupt mayor. In order to ensure his presence is felt, the mayor puts his name on all police vehicles. On the frontside of the van it also reads, “This is a zero tolerance community.”

END_OF_DOCUMENT_TOKEN_TO_BE_REPLACED

Thanks to ABC for holding up our work and our community! They describe ACJP as “an innovative program for families to navigate their criminal justice system to bring their loved ones home from jail, prison, or immigration detention.” If you didn’t see it on TV, check it out here! If you are interested in getting trained on how to start a Family Justice Hub, or are a public defender office interested in seeing how to better build with your client communities — drop us a note!

We were honored to give a training session at Wake Forest University Law School to the next generation public defenders from across the South on how they can make social biography videos. The attorneys were a cohort of Gideon’s Promise, the amazing training program for Southern public defenders that is also focus of the HBO film Gideon’s Army. We have no doubt that in the future, when we look back at what helped end mass incarceration in this country, Gideon’s Promise will stand out as one of the most important actors of this historic movement. Here are some flicks! 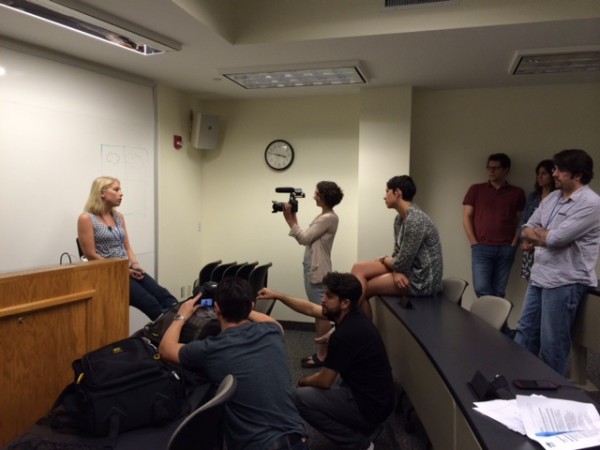 Some of the Gideon Promise attorney’s doing a mock video based on a case they may start with when they get home.

Louisiana tat! This is when you know your attorney is down for their state.

Next generation attorneys from all over the South after taking our Social Biography Video class.

We recently went to St.Louis to produce a social biography video for a capital case. The attorneys, as committed as we have ever seen, are determined to saving their client’s life. Their state of Missouri had been on a torrid  execution pace — averaging an execution a month this year. We were asked to capture the story of the community their client grew up in during 1990’s — a decade defined as a “war zone” for that part of the city. Their client, the man who’s life we are fighting for, said, “You grow into the shape of the container you were raised in.” The poetic reflection gave us a framework for our video. We would ask people — the survivors of an era of extreme violence, drugs, and political corruption — to describe their city in the 90’s. The first response we got from someone as he showed us all of his bullet woulds and stabbing works. He said, “Three words? Do or die.” The following photos by Jean Melesaine shares some of the visions we saw — a post-war city, still holding on to what got them thru: dignity, love, and each other. (Click the image to see the full photo essay on De-Bug.)

“Bone” shows us where he was shot in his abdomen and his tattoos. When asked why we didn’t see more men of his age in the municipality, he said, “They are all dead or in prison.” His tattoos read: “Gods Son.”