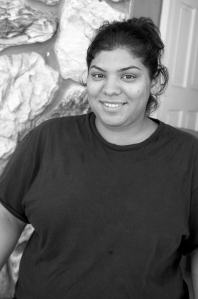 Martha, along with her brother Sergio, were facing charges of resisting arrest and battery upon a police officer. The thick slew of police reports described her and her brother being belligerent and uncooperative with the police, thus prompting them to tase Martha, and tase and beat Sergio to the ground in front of their own home and families.

They came to De-Bug a week after the incident.  At that point, Sergio had been arrested and pled to resisting arrest (all without an attorney present since the Public Defender’s Office did not staff arraignment court in Santa Clara County at that time), while Martha was arrested but released without any charges.  That same week, De-Bug members took video statements of Martha and other people at the house who witnessed the incident, including Martha’s then 11-year-old sister who saw the police tase Martha and Sergio.  Martha and Sergio’s father also videotaped a portion of the incident itself via camera phone of the police beating his son and holding his daughter to the ground.  Martha had also seen the police reports and had diligently read over each page, noting places where there were contradictions between the police accounts, her account, and other witnesses.  A key point of departure was the police officer’s description of what led to her tasing vs. her own account of what happened.  The police report made it seem as though Martha instigated the incident, whereas her account — as well as the video — showed the reverse of the story.

It wasn’t until four months later that Martha was charged with resisting arrest and battery upon a police officer.  She was arrested by San Jose Police.  What was key to her defense was the video statements that she and her family members made fresh after the incident. Upon learning who her public defender was, De-Bug staff contacted her and gave her the video statements, her father’s video, as well as Martha’s notes detailing the contradictions and her own statement.  This exchange happened well-before Martha’s first court appearance, which then provided the public defender information to help Martha’s case.  The public defender was incredibly responsive, and immediately ordered a transcript of all the video statements and communicated with Martha frequently as well as her family and De-Bug. Martha was also able to be released on supervised OR, and met with her public defender while she was out of custody.

OUTCOME: Because Martha had done so much work in the front-end of the case (such as writing her account of the incident, having witnesses memorialize what happened through video, and reading police reports), and because her family and De-Bug were able to respond quickly when Martha was tased by the police and then subsequetly arrested, and because the public defender assigned to her case, Sonia Smith, was incredibly tenacious in her defense, Martha’s charges were all dismissed in the interest of justice.  What happened to her has inspired her to pursue being a lawyer.