Congrats to our community partners and the Montgomery County Public Defender’s Office for the news feature on the launch of their participatory defense hub! Families from Pottstown were commuting across the county to the Norristown participatory defense meetings in Montgomery County, Pennsylvania, but with the support of the Cadcom facilitators, the public defender, and the Pottstown community leaders — they started their own hub. Check out their story by clicking here… 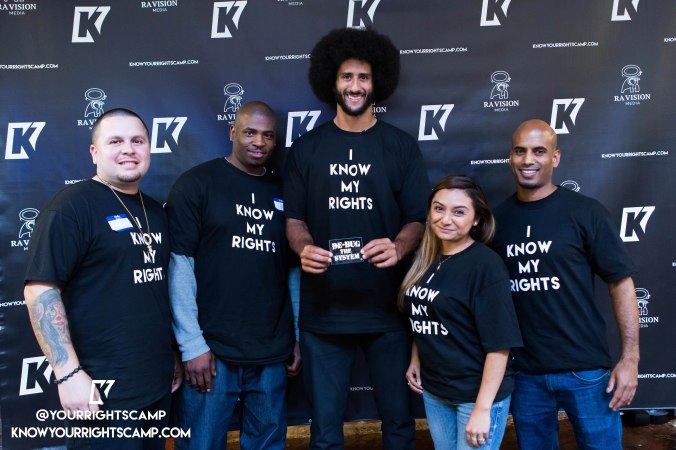 It was with great honor that De-Bug//ACJP was able to give a session at Colin Kaepernick’s Know Your Rights Camp for hundreds of Oakland youth. The camp was an incredible holistic campaign to “raise awareness on higher education, self empowerment, and instructions to properly interact with law enforcement in various scenarios.” The De-Bug//ACJP team gave a session on how youth of color can protect their rights during interactions with police, as well as what they and their communities can do after an arrest to bring their loved one home (participatory defense tactics). Ramon Vasquez — who was wrongfully charged for a murder, and eventually won a factual finding of innocence — shared his story about what happened to him and what he and his family did to win his freedom. Lamar Noble also gave his testimony of being wrongfully charged with resisting arrest and how he challenged the false allegations.

What we find working with communities across the country is while there is attention on what to do with police interactions, our movement needs to also be equipped on how to respond even after the initial contact with police — which is just the first face of the criminal justice system. We wanted to impart a belief that young people and their communities have the power and capacity to fight back against a system that targets them in the streets and in the courts. So every youth was given a First 24 Oakland Youth Edition — which listed not only their rights around police contact, but also gave key county and juvenile court specific information on what they can do after an arrest and through the duration of the court process. Sarait Escorza, a De-Bug participatory defense organizer, walked the youth through the poster, which also included who to call immediately after an arrest to intervene in a detention. Special thanks to the Alameda County Public Defender’s Office, the A.L. Costa Community Development Center, and Human Rights Watch for contributing to the poster!

The Know Your Rights Camps will be happening all around the country, so stay tuned to their site for more information. And if your community would want De-Bug//ACJP to give a participatory defense workshop to youth, or develop a First 24 poster with your county, reach out to us. We also currently have one for Santa Clara County, Hennipin County, Nashville, Denver, and are collaborating to make them in New York, Philly, Durham, and more. And much respect to Colin, Nessa, Cat, and the whole Know Your Rights Camp team for believing in and supporting the youth! 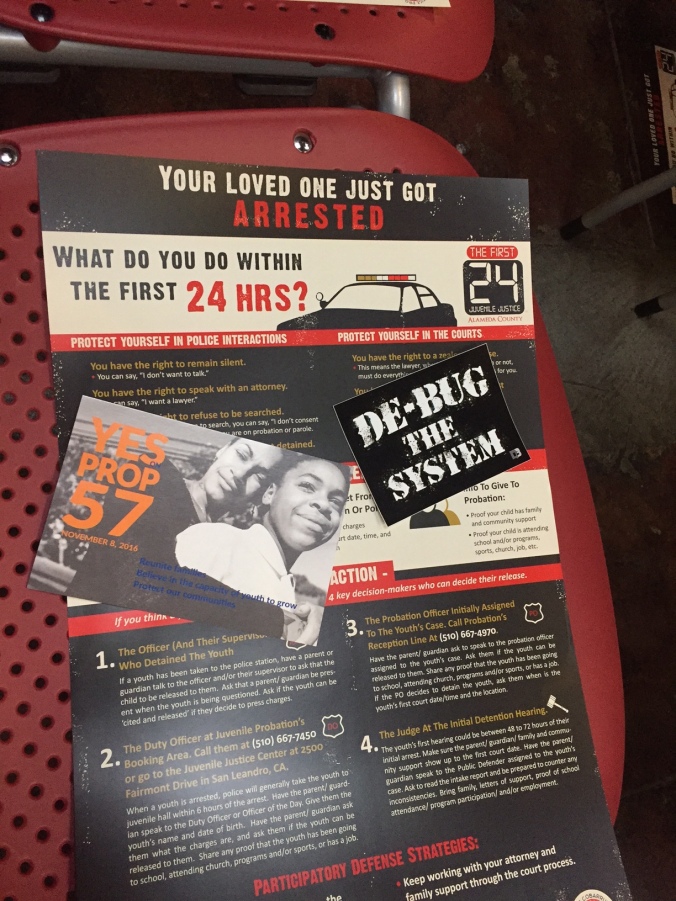 The First 24 Oakland Youth Edition, with a Yes on Prop 57 flier and De-Bug the System sticker!