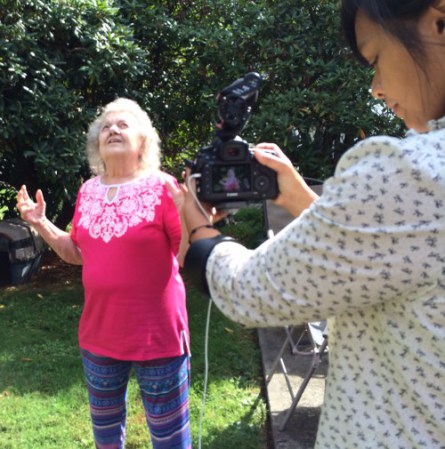 Image from our most recent social biography video in New York. Charisse capturing this mother’s reflection of the first time she stood in the backyard of the home her son bought her.

We are here in her backyard to do a video to keep her son out of prison. She never had a backyard before. She raised her kids, as a single mother, in apartments down the hill in this small New York town. When her son was grown, he walks her by this house and asks her if she likes it. He used to cut the lawn during summers there as a boy. She says yes, and he says, “It’s yours now ma, I bought it for you.” She has cancer now, has had part of her lungs removed. She can’t come out back that often because it gets hard to breath, but standing here used to be her favorite thing. The day she first stood in her backyard (the moment she is recalling now and telling Charisse) she says is the happiest moment of her 85 years. Her son, who now takes care of her full time, is facing prison time, and she is is sharing with us his story, her story, the family story, so we can produce this social biography video for the judge to know the impact of his possible incarceration.

She was scared when probation first came barging in her house, pushing her aside to get her son. But at 85, she is still her son’s mother, and stepped in front of them, and told them not to disrespect the house. When they come now, they knock first, as she asked. She sees them through the window but asks, “Who is it?” They answer, now as polite as she has trained them. And then, sometimes, she makes them wait, just for a brief beat of moment.

Our friend, colleague, and mentor Jonathan Rapping has just received a McArthur Genius Award! Rapping and the Gideon’s Promise team are revolutionizing public defense in this country by both being innovative and forward thinking, yet deeply embedded in the traditions and values of America’s civil rights movement. Check out the piece we wrote on Rapping last year, Gideon’s Army Deserves Back Up. We have been honored to partner with Rapping to train his lawyers at Gideon’s Promise gatherings in Atlanta and North Carolina on our social biography video concept. Below is a pic of Rap with Fernando a couple months back at Wake Forest Law School. Congrats to Rapping and the Gideon’s Promise team! Click the image to see the video on Rapping on the McArthur website. 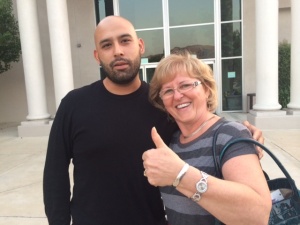 This photo taken after one of our meetings last week. His brother is facing life in prison. Her son was facing over 10 years in prison. They were strangers. He is from Mexico, she is from Poland. They met while visiting their loved ones at jail. He told her about De-Bug’s ACJP meetings that he had been attending. She started coming. This week, much due to her perseverance, her son will be home in just 5 months, and won’t have to go to prison. A private attorney says her son won’t get any less then 9 years. That attorney was wrong. Today, she to continue to come to meetings to support her new friend’s effort to free his brother. These strangers are united in a unique way, crafted by this both the horror of possibly losing a loved one to the system, and the hope that they can impact the outcome of the case. Respect to the families who are fighting for their loved ones, yet still have the never ending generosity to assist others in similar struggles. May just be the most powerful thing out there, and the only thing that can end mass incarceration.

Thanks to Equal Voice News for asking us to write a piece explaining the philosophy of De-Bug and ACJP. In the essay, we explain what principles guide us towards a belief that — including other goals — families stop incarceration, institutions can bend to the gravity of true justice, and communities transform the courts. Click image to read article >>>