Armed with letters from the community, Mary heads out to Modesto for a final meeting with the attorney of her brother. He is serving a life sentence, and has been inside for 18 years already. With the passage of Proposition 36, he now has the possibility of being re-sentenced, which would lead to his release. Mary started coming to De-Bug and advocating for her brother well before the 3 Strikes Reform. Some attorneys told her his release was unlikely. But then again, most did not expect her to get this far. Next week, Mary, her family, and De-Bug will be caravaning to the his court date, to hopefully witness the start of a re-unification of this family. (See the photo of Mary from the beginning of the year, when her and her mother first learned that her brother may be on the list of potential re-sentences.) 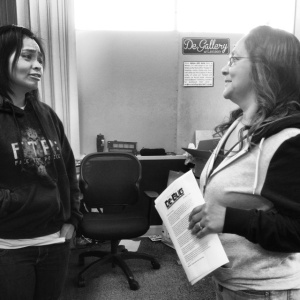