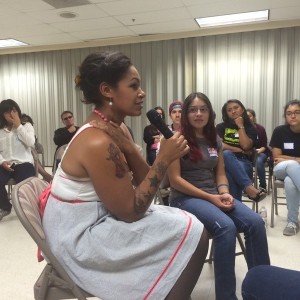 Steeda McGruder shares her testimony at a Yes on Prop 47 event with labor and youth advocates.

My first charge as an adolescent was a petty theft. When I think back 19 years ago my reasons for my actions seem so juvenile — peer pressure, lack of adult influence in my life and simply boredom growing up in a small town population 26,000 and a huge drug scene. A petty theft was simply entertainment to young people back in those days. When I turned 18, I was super excited to have shook the juvenile system. I had many great plans and ideas of what my life would be like now that I was free from the juvenile system. I guess you could say I had hope for my future, but to my surprise shortly after I turned 18 I was incarcerated for another petty theft.

My behaviors had never been addressed, just pushed aside. I had time to serve, but never the support or tools needed to be truly corrected. I’m sure you can imagine at the age of 18, my ideas about life are completely different than at the age of 12, especially being a single mom at the age of 18. Life showed up, and when it did, I behaved in a way that screamed “just survive.” END_OF_DOCUMENT_TOKEN_TO_BE_REPLACED

This mom and daughter first came to De-Bug about 4 years ago, when she was only 16 years old, and facing charges in juvenile court.  Her mom kept insisting that her daughter did nothing wrong, and despite her family, community, and her attorneys fighting for her, the courts nevertheless put her on probation. However, they never gave up in pursuing justice. This week, she became the first person ever locally to win a dismissal of her juvenile case through a 782 code, making Santa Clara County legal history in the process.  “I put off so many job applications because I didn’t know how to move forward,” she says. But because of her unwavering family and community support, as well as great advocacy from her public defender, this family has triumphed.  “I couldn’t give up, because I had people — especially my mom — that wouldn’t give up.” — Submission Post by Charisse Domingo

Check out this moving video made by De-Bug’s Jean Melesaine on Lisa Carter, the first woman in Santa Clara County who won her release from a life sentence due to Proposition 36.  Judge Deborah Ryan granted Lisa release after serving 18 years in prison for a $150 shoplifting charge (her 3rd strike), with the tremendous support from her family, friends, community, and public defender. This video will be part of the Time Saved series, chronicling stories of families bringing loved ones home from incarceration.

Read and listen to the story of Ramon Vasquez, a 33 year old father of 2, who was released from Santa Clara County Jail back in 2008 for a crime he didn’t commit.  His family came weekly to De-Bug meetings to get assistance for his case, and because of their persistence and community support, Ramon is home.

This is part of the “Time Saved” series.  In court systems across the country, the term used to show that someone has done their time of incarceration is called “Time Served.”  At De-Bug, we transform that term, and that time, to “time saved” through family and community organizing to change the outcome of cases.  — Submission Post by Charisse Domingo

In 1968, George Whitmore, Jr. was beaten by New York police and coerced to signing a 61 page confession that he murdered two women.  He contended that he was somewhere else that day — watching Martin Luther King Jr’s historic civil rights speech and had witnesses who could attest to him.  Nevertheless, he was convicted for these murders.  Steadfast to his innocence — and supported by lawyers, advocates, and civil rights activists — his conviction was overturned 9 years later.  And his case was pivotal to the Supreme Court’s Miranda ruling to protect alleged suspects and to the partial repeal of capital punishment in New York City.

While he is 3,000 miles away from Santa Clara County, the impact of his resolve to maintain his innocence reverbrates here.  At ACJP, we’ve seen youth as young as 15 forced to make confessions to crimes they didn’t commit.  But because of cases like Mr. Whitmore Jr, people can still be protected.  This particular editorial talks about the emotional toll the system can take on you and the personal fall-out of the struggle for justice.  It is this silent and sad struggle that is rarely documented.  To the question the writer posed on “Who Will Mourn George Whitmore Jr”, we resoundingly answer — we will, and we will honor his sacrifice as we hold our systems accountable.  Submitted by Charisse Domingo

I received news this week of the death of George Whitmore Jr., an occurrence noted, apparently, by no one in the public arena. That Whitmore could die without a single mention in the media is a commentary on a city and nation that would rather bury and forget the difficult aspects of our shared history.

Forty-eight years ago, as a New York City teenager, Whitmore was initiated into an ordeal at the hands of a racist criminal justice system. For a time, his story rattled the news cycle. He was chewed up and spit out: an ill-prepared kid vilified as a murderer, then championed as an emblem of injustice and, finally, cast aside. That he survived his tribulations and lived to the age of 68 was a miracle.
END_OF_DOCUMENT_TOKEN_TO_BE_REPLACED

Our friends in Sacramento from the Criminal Justice Information Network sent us an update on the criminal justice bills being debated on the legislative floors. Below is a listing and their status. One particular bill that we have our eye on is AB 1709 — which would allow for jury trials for minors in particular cases. Interesting concept, wondering how it would impact conviction rates (what is called “sustained petitions” in juvenile court). Let us know what you think too! Post submission by Raj Jayadev

Bills on Juveniles, Realignment, Reentry, and a New Life Sentence

Today in Assembly Public Safety Committee, bills that would support defendants and their families with record-sealing, reentry, and due process were approved. One bill to increase law enforcement representation on county realignment boards was also passed. Additionally, a bill to add a life sentence to the existing offense for human trafficking of a minor was voted down by the committee. END_OF_DOCUMENT_TOKEN_TO_BE_REPLACED

On Friday, September 30, 2011, a California appellate panel found that Santa Clara County prosecutor Troy Benson committed “substantial misconduct” in a criminal case that then resulted in a reversal of conviction for defendant Agustin Uribe.  Judge Andrea Bryan further freed Uribe, and her actions caused then District Attorney Dolores Carr to call for a boycott of her courtroom by her prosecutors.  Post submission by Charisse Domingo

Justices: Prosecutor committed ‘substantial’ misconduct but defendant should not have been freed

In a blistering decision that could jeopardize the career of a Santa Clara County prosecutor, an appellate panel found Friday that attorney Troy Benson committed “substantial misconduct” by testifying “untruthfully” about a child sex-assault case he handled, but ruled a local judge went too far when she freed the defendant in response.  Read more here….