It was tremendous honor that some of us participatory defense organizers from California were invited to build with community leaders and the public defender’s office of Nashville, as they launched the first participatory defense hub in Tennessee! We met an incredible and resilient community who is deeply invested in advocating for justice and fairness in the courts and the neighborhoods. We started by doing doing a participatory defense training with public defenders and community advocates who were a diverse network of re-entry service providers, church leaders, community organizers and more. We went over how community and defender partnerships can tangibly change the outcome of cases, how the collaboration can lead to systemic changes in the criminal justice system, as well as how to get started. Some friends of JustCity (a non-profit organization in Memphis), the Shelby County Public Defender’s Office, and the Knoxville Public Defender’s Office attended as well! The following day we went to court with the community advocates, being guided by the defender’s office, so the community could get a clearer understanding of the mechanics of the court, and where their voice and partnership could have impact. After that we did a session on how to make social biography videos, and then that evening held the first ever participatory defense meeting in Nashville at a church hosted by the Family Reconciliation Center. That same day, we co-authored an op-ed in the Tennessean on the launch of participatory defense in Nashville. You can check that out by clicking, “Public defenders, community work to reduce incarceration.” Special salute to Gideon’s Promise and the National Association for Public Defense, who fostered the space and belief to build this incredible bridge, and to Dawn, Sara, Malinda and all our partner’s in Nashville — we are so humbled by your spirit, leadership, and value driven fight for justice!

Check out the photos below to meet some of the amazing people we got introduced to, and see the exciting work going on in Nashville! 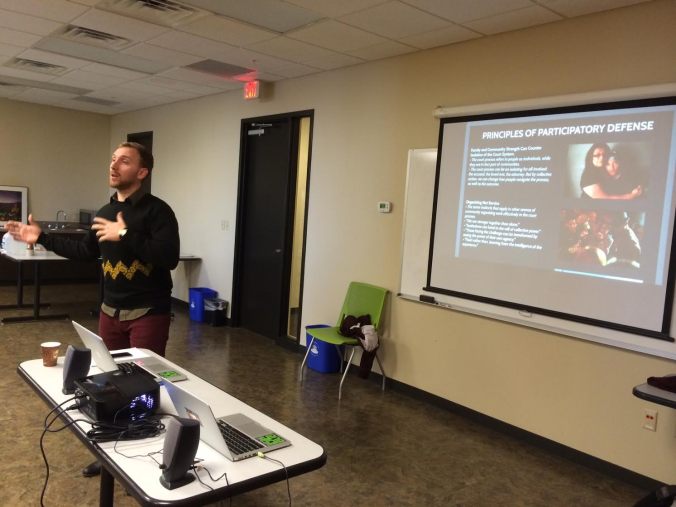 At the introduction to participatory defense training at the Nashville Public Defender’s Office, Andrew goes through various principles that has helped guide communities have lasting and sustainable impact in their communities.

This incredible couple, Donna and Lee Starkey, manage The Guesthouse — a project of the Family Reconciliation Center. And it’s not just your average bed and breakfast. For over 30 years the guesthouse has provided lodging, home-cooked meals, and support, for families who travel to visit their loved ones in the prisons in Nashville. And the families stay free of charge. 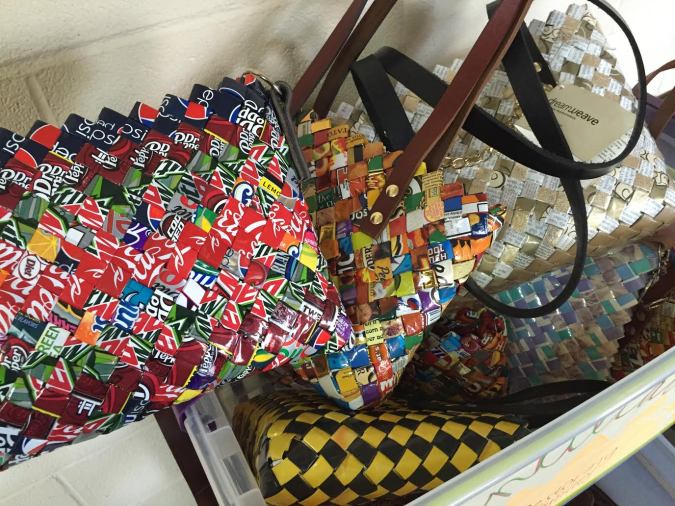 A new entrepreneurial project by the Family Reconciliation Center is DreamWeave. These beautiful purses, made out of discarded chip bags, Bibles, and more, are hand woven by women in the local prisons. Each purse also has a written dream of the person who weaved the piece of art. They are launching their line later this month. 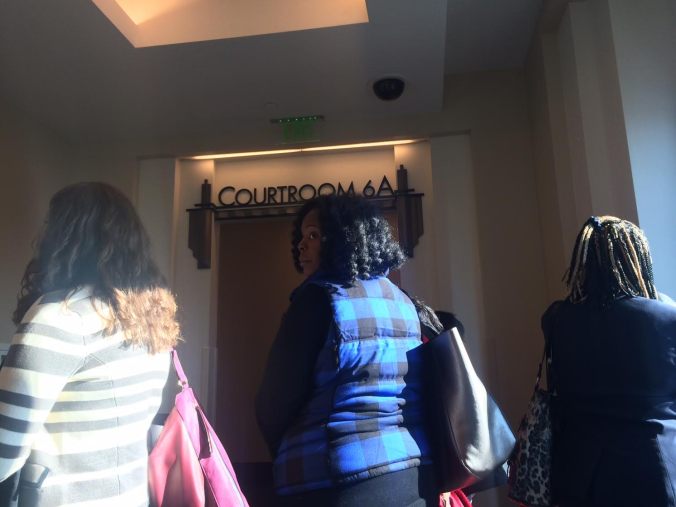 The following day after the initial training, we went with local community service providers and advocates to the courthouse, being guided by the public defender’s office. The purpose of the visit was so community leaders could ask the questions around the mechanics and language of the court that often is only understood by the attorneys, as well as to make any observations they thought was important. We compare this to having players step onto the field the day before a game, or for performers stepping onto a stage before an event — getting used to the arena where you will be doing your work. The point is for the community to feel comfortable and not intimated or unsure in the arena of the courts. 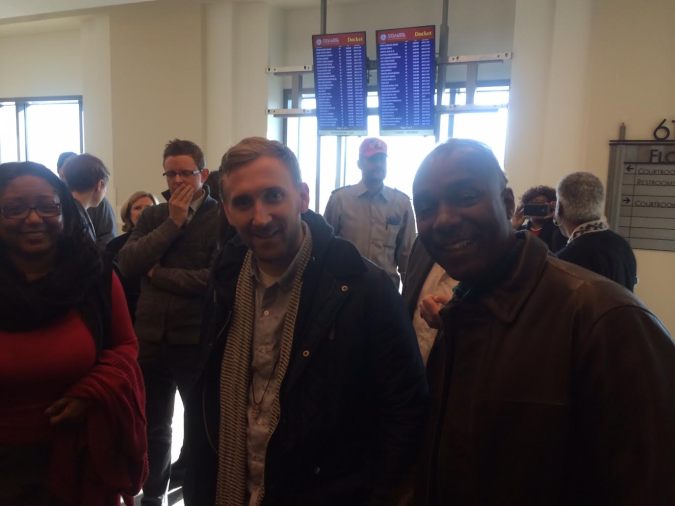 While waiting for our next court session, Andrew shares a moment with Ndume Olatushani, (on right) an incredible freedom fighter who did 28 years, 20 of which were on death row, after being wrongfully convicted. Ndume is also an accomplished artist, educator, and works for the Children’s Defense Fund. It was an honor that he was involved in our training. 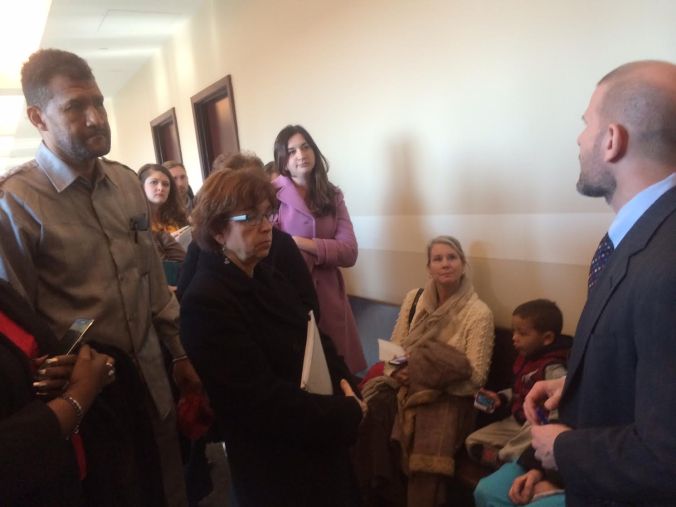 In a powerful display of participatory defense in action, our group of attendees were able to watch a Nashville public defender prevent six and a half years of potential prison time through the partnership with his client, and his client’s family and church! Here John (on right) shares his thoughts with the group when we left court. At the hearing, John garnered the support of his client’s wife, who brought in the church. At this probation violation hearing, the family and church were not only present in court to show community support, they also testified, and shared, through responses to the public defender’s skillfully crafted questions, how they were going to make sure John’s client received the support he needed so he would successfully complete his probation. John’s client had been detained since arrest, and facing over six years if the judge decided to revoke probation. But after hearing the testimony, and seeing the support (John asked all of the church members to stand up at one point) the judge closed the session by saying John’s client “would be back at church this coming Sunday.” It was a tremendous moment. 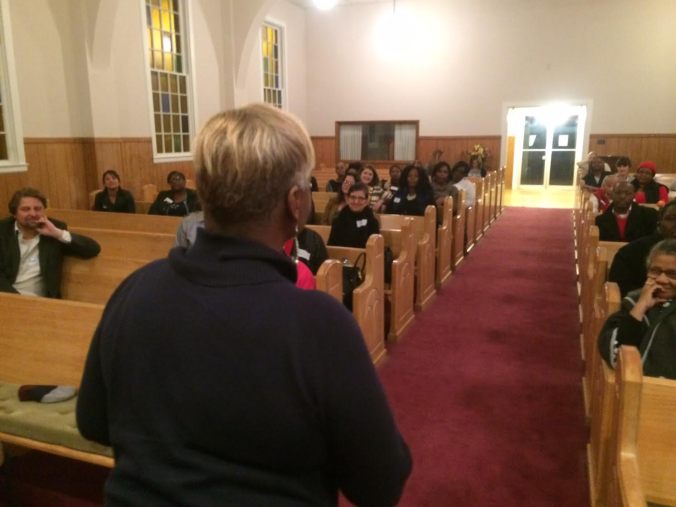 At the end of our two days of trainings and visits with the community, Nashville held it’s first participatory defense meeting hosted at a church that partners with the Family Reconciliation Center. Here, Gail is giving an introduction to what the flow of the meeting will be, and what is to be expected. She uses the same words and phrases we have used in California at the start of every participatory defense meeting on every Sunday for over eight years. And today, some variation of that introduction is being used by community leaders at the start of meetings in Alabama, Pennsylvania, Kentucky, other counties of California — and now Nashville.

One thought on “PHOTO RECAP: Participatory Defense Launches in Nashville!”