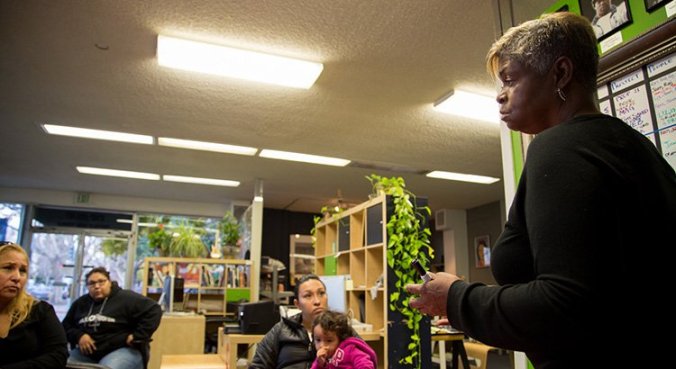 Every week I sit in a room with families whose loved ones are facing criminal charges. It is part support group, part strategic planning session. There are no lawyers in the room and the families have no legal training.

But week in, week out, the group translates the legalese to one another, navigates each other through the maze of a court system and finds ways to affect the outcome of cases.

No one is trying to be Perry Mason or a pseudo-lawyer; they just want to do whatever they can to stop an incarceration. The results of the meetings are incredible — families become partners with their defense attorney, wrongful charges are dropped, sentences reduced.

While the outcomes are remarkable, the meetings themselves are powerful to watch. People who initially thought the mechanics of the courts were totally indecipherable eventually are discussing complex aspects of the law like penal codes, pretrial motions and defense theories after a few weeks of attendance.

After seven years of attending these meetings, I now know how to answer that question — it is what I call ‘cumulative intelligence’, based on personal experience. It is a living body of knowledge that grows with each new family that attends and each new case the group takes on. Cumulative intelligence is not particular to this meeting model. It is a dynamic form of thinking and learning that is inherent to grassroots organizing — an IQ that is baked into the very nature of taking on an issue as a group rather than alone. It is the nature of faithfully meeting and collectively solving a problem until the issue is decided, and of respecting the personal experience of those most affected.

To hear a family member who has been attending one of our meetings since the inception of the group talk to a new family just starting a case is the best way to explain cumulative intelligence.

From Mother to Court Process Navigator

When Gail Noble first came to the meetings when the group was just starting, she knew nothing about the law or the institutions of the court, much less how to change that system that was trying to incarcerate her son. But at the meeting today, years later, responding to the new woman sitting across the table, she sounds like part legal database, part sage.

Gail is calmly and coolly encouraging the woman frozen in confusion about what she can do to help her husband who is in jail, facing criminal charges and a possible prison sentence if convicted. She came to this weekly meeting because she heard she could get some support through the process.

Gail finishes gathering basic information from the woman — things like charges, how many court dates have occurred, the name of the attorney who is representing her husband. Then, she shares some ideas with the woman of what the family could do. She is distilling and sharing ideas that draw from her own experience when her son was facing charges, other cases she has navigated families through and the stories of other members of the weekly meeting.

She is sharing tangible actions, steps like gathering biographical information of her husband to get to the attorney and reviewing discovery material like police reports and witness statements. Other families in the room also offer thoughts — and words of encouragement.

The woman listens intently, nods, expands on the ideas first offered and visibly grows in her confidence. She is less daunted and has a roadmap she has made, in concert with Gail and others in the room, to move forward.

The whole exchange lasts 10 minutes, but in that time, seven years of information and the experience of dozens of families is funneled through Gail and transferred to this woman.

The new attendee looks at Gail as if she is an oracle. The reality is, if she keeps attending the meetings, she may serve the same role for someone — as Gail has for her. And her story, the journey she is just starting, will grow the body of knowledge of the group.

This process of families supporting one another through the court system in the form of weekly meetings fills an emotional need — the way any support group going through crisis would. It also is a constantly growing, evolving, refining, knowledge base.

I think design thinkers call this “ideating.” The reality is families who are trying to stop a loved one from getting locked up “ideate” a lot by necessity. Every week is a running hackathon on the question: How do I keep them home, instead of behind bars? There are all “end-users” here.

Gail essentially was that new woman at the group seven years ago. Her son had been arrested. She was not a lawyer and had no reason to know penal codes, obligations of the defense attorney to clients or the rules of the court. It is a common experience that leaves a common problem. How can anyone expect families to intelligently navigate the court system, when the only way they would acquire that knowledge is by actually going through the court process? Thus making the knowledge useless — too late to be applied for any purpose.

It is a design flaw, or a flaw by design.

But Gail’s sharing with this woman shows how cumulative intelligence can make experiential knowledge useful. Here is what happened over the years of meetings that resulted in the 10 minutes of guidance by Gail to the woman at her first meeting.

Seven years ago, Gail first attended this fledging weekly meeting where she and others committed to assisting her attempted to navigate the court system and find ways to get the best outcome for her family. Certain questions arose that Gail and the group would brainstorm and research.

How do you find a court file? What pieces of information are important to share with a judge? What should the attorney be doing at different stages of a case?

Each new family was informed by the learnings of their predecessors. New cases offered new questions for the group to answer. And it was not just about becoming familiar with the law, it was about learnings that would make families effective in the totality of the criminal justice system.

What happens if a family member facing a criminal charge has mental health issues? What if a loved one is detained and needs his glasses to read police reports? How do you communicate with a busy lawyer without seeming like a nag?

The answers to these questions become banked in the cumulative intelligence of the weekly meeting.

The Dojo of Organizing

So when the new woman attending the meeting asks Gail the question, “How can I impact my husband’s sentence?” and Gail responds almost reflexively with a voluminous answer, the woman is amazed. But really, what she is hearing is the result of years of cumulative intelligence — of Gail attending the weekly meeting and being a conduit of learning for all the families who have contributed to the body of knowledge.

The woman also is trusting of Gail because she is speaking from her own experience. She knows Gail has been in her shoes at one point. Krishnamurthi, the 20th century Indian philosopher, once said, “You can’t get wet talking about water.”

In that way, there are certain things to be learned solely through the experience. Ask new lawyers if law school fully prepared them for their first trial.

In that way, Gail is a black belt in supporting families through the court system.

And this cumulative intelligence, this art, deepens and expands as more families attend, and consequently, the next family who comes to the meeting for a loved ones case is the beneficiary of all the prior experiences.

And the body of cumulative intelligence grows.

(This piece originally ran on Equal Voice News, and also appeared in the Huffington Post.)