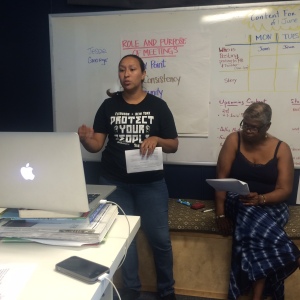 The author, Cecilia, facilitating a skype training on how to build social biography packets.

I met Jose (name changed) five months ago. He came into De-Bug with his mom who had worked with us previously in another one of her son’s case. Jose, who was 19 and undocumented, was facing serious charges — up to 15 years of incarceration for an alleged incident that was not a reflection of who he was as a young man. Days previous to the alleged incident he had gone through some traumatic experiences with his stepfather and on top of that was mourning the death of his biological father in Mexico. When the family came to our participatory defense meeting, they were prepared and brought supporting information to help counteract the picture that had been painted of Jose by the police reports. Shortly after, we sat down with his attorney and started collecting more social biographical information such as character references, proof of enrollment in programs that were helping him deal with is trauma, and  other material that could support his case. With all this, I helped the family build a social biography packet that was used by his public defender when they negotiated with the prosecutor.

After reviewing the material, the DA agreed to drop all the charges but one. The only charge he would was one felony that carried a three-year sentence. But this was not enough for Jose, whose life had taken a turn for the better since those dark times when he was dealing with the passing of his father. He was now a husband awaiting the arrival of his first baby. We met again and added this new information to the packet, along with more letters of support and proof of employment, for the judge to have a better understanding of Jose and his family’s potential future if he could avoid a prison term. On their following court appearance the DA demanded that Jose be sentence to the maximum three-year sentence, but the judge did not agree. The judge told the DA that he needed to review the social biography packet one more time and find an adequate sentence of a year or less. This is a sentence that Jose was comfortable agreeing to as he would not have to go to prison.

And for Jose, the implication of the dramatically reduced sentence can pay off even more in the future. Because of the reduction of charges and sentence, he has preserved a shot of being eligible for DACA, a form of immigration relief. We are adding Jose’s numbers to our growing Time Saved count!