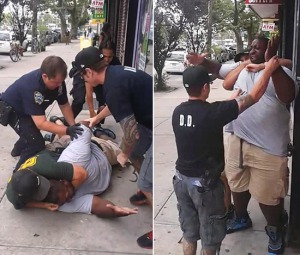 Still images of video of Eric Garner being choked to death by NYPD.

With the no indictment decision of officer Darren Wilson for the killing of Mike Brown, and the the same outcome on the officers who killed Eric Garner, the country is left to wonder: Is it even possible for police to be held accountable in the courts? Retired public defender, and ACJP co-founder, Aram James explores the history and potential possibilities of addressing the questions. In the piece, James cites Supreme Court case law advancing the notion that court proceedings for officers should be public and transparent.

Can we achieve systemic justice in officer involved shootings, and other forms of police murder? Is it possible in this country, given our two tier justice system, one designed for the police and another designed for the rest of us? What are the necessary steps we must take to restore trust in our criminal justice system, when the police seem, rarely, if ever, to be held fully accountable, when they shoot and kill, strangle and tase and brutally beat to death, unarmed people of color, and the poor?

How is it that in 2014, a decision whether to prosecute such a shocking crime, one carried out in broad day light, before numerous witnesses, can be relegated to a secret, behind closed doors, grand jury process? This secrecy is particularly ironic for an incident that has played out so publicly in our media, both here at home and worldwide. Doubly ironic, when mostly peaceful demonstrators, demanding an open flow of information regarding the case, have instead, been met with a martial-law war-zone-like response, from both the police and local government in Ferguson. As more than one commentator has said about closed proceedings: “Democracy itself dies behind closed doors.”

The importance of open proceedings, our supreme court speaks

Our U.S. Supreme Court in Richmond Newspapers INC. v. Virginia (1980) eloquently expressed the importance of open criminal proceedings, and the risks inherent to the public trust, and public safety itself, when such proceedings, instead of being held in the open, are closed off to the public view, and the necessary scrutiny of watchdogs from the community, and the press:

“The historical evidence of the evolution of the criminal trial in Anglo-American justice demonstrates conclusively that at the time this Nation’s organic laws were adopted, criminal trials both here and in England had long been presumptively open, thus giving assurance that the proceedings were conducted fairly to all concerned and discouraging perjury, the misconduct of the participants, or decisions based on secret bias or partiality. In addition, the significant community therapeutic value of public trials was recognized: when a shocking crime occurs, a community reaction of outrage and public protest often follows, and thereafter the open processes of justice serve an important prophylactic purpose, providing an outlet for community concern, hostility and emotion. To work effectively, it is important that society’s criminal process ‘satisfy the appearance of justice,’ which can best be provided by allowing people to observe such process. From this unbroken, uncontradicted history, supported by reasons as valid today as in centuries past, it must be concluded that a presumption of openness inheres in the very nature of a criminal trial under this Nation’s system of justice.”

Our own Supreme Court’s logic dictates, in fact compels, the conclusion that secret grand juries should be abolished and that public proceeding (preliminary examinations) be the rule in probable cause hearings, in all serious cases, where the determination is made, whether there is sufficient evidence to believe a crime has been committed, and that a particular person has committed such a serious crime, justifying a subsequent jury trial on the charges. This standard of probable cause, in an open setting, should apply to all persons charged with serious crimes, but certainly those involving the police, and others public officials, who hold the public trust. Public officials should be held to a higher level of public scrutiny and accountability, not a lower standard.

If you or I (as ordinary citizens) are charged with a shocking crime, say shooting down an unarmed human being, apparently without provocation, it is extremely unlikely that our potential prosecution will be decided in a secret closed door proceeding (by a criminal grand jury) . What is likely is that our guilt or innocence will be played out in a public setting, for all the world to view.

First, we can assume, except in the rare circumstance of a clear case of say self-defense, determined by a prosecutor, early in the process, that we will be arrested, and shortly thereafter brought to an open court proceeding, to enter a plea to the charges. Subsequently, all proceedings in our case, preliminary examination, jury trial, sentencing, etc., will be open to public and press scrutiny. The opposite of the secrecy and government oppression, that most often characterize grand jury proceedings.

To mitigate mistrust of our government, and the police state mentality often associated with our police, and our entire criminal justice system, particularly when they interact with people of color and the poor, we must do away with secret proceedings (grand juries). Secret proceedings that allow the police, in officer involved shootings, to shield their actions from public accountably. No openness means, more often than not, no justice. We the people, can no longer allow secret proceedings to stand.

If we the people are ever to change the two tier system of justice , we must take the time to know our local elected prosecutors, and how they think on the critical criminal justice issues of the day. We must actively participate in their election. If an individual elected prosecutor insists on treating police with prosecutorial kid gloves, we need to vote that prosecutor out of office.

The elected district attorney would delegate to this unit the responsibility for prosecuting serious police crimes, with the same prosecutorial skill, equal protection of the law and professionalism as any other serious criminal activity.

In the end, absent our willingness to engage in “participatory justice” where the community is an equal partner with the local prosecutor, the local defense bar, and the local police, we will continue to hear the cries of injustice go unanswered in officer involved shootings, and other acts of police brutality.

One thought on “Officers Who Killed Eric Garner and Mike Brown Walk — Will Cops Ever Be Held to Account in the Courts?”