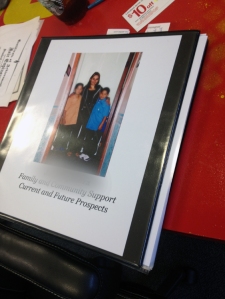 Rosario came to us at De-Bug last week for assistance regarding her son who had an immigration detainer hold at San Mateo County’s juvenile hall. We helped her create a “mitigation packet” — a package of letters, photos, and history that would be used to tell the fuller story of her son. He had already spent a good 7 months at camp, had an excellent report card, supportive probation officers, and a dedicated mom who kept every single certificate her son earned in school and at camp.  In San Mateo County, Probation Chief John Keene stopped the practice of referring juveniles to ICE on a routine basis, except for ‘rare and exceptional cases’ — in which he would have the sole power of deciding whether or not to transfer a youth to ICE custody.  This practice came after a four year campaign by the San Mateo County Coalition for Immigrants Rights, which De-Bug is a part of, to reverse this harsh policy.  This mitigation packet was to be presented to the Chief to ask him not to enforce an ICE hold on Rosario’s son.

Even though she’s been in the Bay Area for over 10 years, this was Rosario’s first time in San Jose.  She took the almost one hour train ride from San Bruno to San Jose, carrying bags of photographs, school certificates, letters, medals, name badges — everything she could gather that could demonstrate how supported, involved, and loved her son is.  She knows the decision to transfer her son to ICE rests on the Chief, and this decision could mean 4-6 months away from her youngest. Youth who are taken to ICE custody are placed under the purview of the Office of Refuge Resettlement, where they are then assigned to group homes all over the country.  Even though her son was placed in camp for 7 plus months, she saw him regularly, bringing him his favorite foods while he tells her about how good he’s been doing at camp.  She couldn’t bear the thought of her son being far away, for so long.

We spent an afternoon looking through and organizing her bag.  The photos and certificates revealed a boy who enjoyed school, was very much appreciated by his teachers, liked to play some sports but not as much as other kids, participated in community organizations, was kind and attentive to younger kids in his neighborhood, and enjoyed family outings. He was also a hard worker and wanted to keep busy working at his dad’s restaurant, helping his mom pay the bills so she didn’t have to worry as much. In a letter he wrote about his release, he says that the departure of his big brother from his home was a big loss to him, and that’s when things became difficult for him. But programs at Glenwood allowed him the time to reflect. During his time at camp, he completed 11 out of 19 programs — including meditation and anger management — and earned his high school diploma.

We submitted a binder on Monday, and Tuesday, Chief Keene got back to his immigration attorney to say he was not enforcing the hold.

Experiences like these prove the power of families impacting the outcomes of their loved ones’ cases, and help shift the balance of power.  The release of Rosario’s son wasn’t a decision of law — it was a matter of political will. With the community behind Rosario and her son, and with a concrete way to demonstrate this, a young man gets to come home. — Submission Post by Charisse Domingo