Seems like more conservative states are the ones to be watched, as they are the ones trying to get over on federal law. -Post Submission By: CFlo

WASHINGTON — The Supreme Court on Monday delivered a split decision on Arizona’s tough 2010 immigration law, upholding its most controversial provision but blocking the implementation of others.

The court unanimously sustained the law’s centerpiece, the one critics have called its “show me your papers” provision. It requires state law enforcement officials to determine the immigration status of anyone they stop or arrest if there is reason to suspect that the individual might be an illegal immigrant. END_OF_DOCUMENT_TOKEN_TO_BE_REPLACED

Just last April, ACJP’s youngest member was at immigration court fighting deportation charges.  Yesterday, he graduated eighth grade.  In the fall of this year, he came back from an ICE detention facility after being referred there by San Mateo County probation.  It’s been one tough year for this young man, but he’s got the love of his family and community to pull him through.  Check out the campaign to stop juvenile ICE holds that ACJP De-Bug is working on with our allies in San Mateo County at www.stopdeportingyouth.com — Submission Post by Charisse Domingo

This is a photo of ACJP De-Bug’s youngest member — only 14 years old, who had an immigration court proceeding today in San Francisco.  He’s been coming to our weekly meetings for months now with his family and we’ve grown to know and love his quiet strength.

Scanning the courtroom, he was also the youngest person there who was facing deportation.  The air was thick with apprehension, of not knowing what was going to happen, and greater than that — of the fear of ICE agents coming into court right then and there.  In the waiting room that looks like a doctor’s office, the brown faces from Mexico, Central America, and Asia are furrowed.  But this young man has incredible courage, far more than what he realizes himself.  He stares down at his paperwork the whole time.  The pro-bono attorney of the day rapidly runs through paperwork to give him and says will ask for a continuance.  She battle-runs through the same set of questions we had seen her ask the Chinese person before us, and the Latino couple right before him.  “Where are you from?”  “Where is your family?”  — All questions that are loaded and sterile at the same time, given the place we were at this morning.

They call his name from the bench and the pro-bono attorney motions with two fingers to come to the front.  “You’re not alone up there,” I told him.  “I know,” he says. “God is with me.”  And he smiles.  It’s only 5 minutes that he’s up there, but the wait was about an hour and a half.  From the audience, I tell myself it’s all procedural today, but every pause of the judge pushes me closer to the edge of my seat.  At the end, another court date is set, and he breathes a sigh of relief outside. He looks up again and can’t wait to run to his mom.

Young people should be thinking about school, sports, what music they like — not deportation proceedings. I am hoping the human side of the immigration system breaks through for this young man, and for all young people and their families.  — Submission Post by Charisse Domingo

Authored by Lena Graber of the National Immigration Project of the National Lawyers Guild, the “All In One Guide To Defeating ICE Hold Requests” is designed to help communities disentangle local police policy and practices from immigration enforcement.  ACJP at De-Bug has been one of the key organizations in the Santa Clara County FIRE (Forum for Immigrant Rights and Empowerment) Coalition that helped secure the most progressive detainer policy in the nation, spearheaded on the Board level by Supervisor George Shirakawa.  Our Coalition’s yearlong efforts are featured on this guide.  As we’ve always asserted, it’s not public safety vs. immigrant rights, but public safety THROUGH immigrant rights. Post submission by Charisse Domingo

With the Stanford Immigrants Rights Clinic, Community Legal Services in East Palo Alto, Immigrant Legal Resource Center, Youth United for Community Action, ACLU North Peninsula Chapter, Comite de Padres Unidos, and Nuestra Casa, we at Silicon Valley De-Bug have helped lead efforts to stop San Mateo County Probation’s practice of juvenile ICE holds in San Mateo County.  Families have come to De-Bug seeking support for their son’s or daughter’s cases where they have been caught up in juvenile hall and then sent to immigrant detention centers across the country — youth as young as 13. For the last four years, we’ve seen an increase in this number of families like no other, beginning with one mother from East Palo Alto who was so distraught at the thought of her 16 year old daughter being deported back to a country that she left when she was 3.  We learned that it was her PO who reported her to ICE, and initially, we thought it was a mistake.  But it turned out to be the complete opposite — this was actually routine practice.  In fact, San Mateo County is the second highest referrer of juveniles to ICE in California — second only to Orange County, according to statistics obtained by Immigrant Legal Resource Center from the Office of Refugee Resettlement.

As part of the coalition’s efforts in the last nine months, we at De-Bug created this page, www.stopdeportingyouth.com, to highlight not just the practice of referring youth to ICE, but the strong stance that a broad-based coalition has taken to urge our county to do otherwise. We believe San Mateo County can do better.  Submission Post by Charisse Domingo

Click here or on the picture below to take you to the site.

Debug ACJP team met with a group from Philly who calls themselves “One Love Movement.” They’re fighting against deportations; does this sound familiar? We shared strategies, heart-felt stories. We embraced them with Debug family love. Thank you “One Love Movement” for coming down to San Jose, CA for taking the time to be part of our movement and sharing with us what you’re doing up in Philly. We are “One Love” and with the power of the community and people who care, we shall make a difference. – Post Submission by Blanca Bosquez

Check out this video of our friends our in Philadelphia:

About two weeks ago, Veronica and her family camped outside a juvenile detention facility hoping that their son won’t be picked up by immigration officials after he was placed on an ICE hold. However, to their dismay, ICE officials came.  In this picture, Veronica, the mom on the left, and Adriana (her sister on the right) waits in an attorney’s office right outside the ICE detention facility in San Francisco.  They were hoping that their son would be released to them right then and there and were waiting for a hearing, when Veronica got a phone call from her son that ICE had already put him on a bus and was an hour away heading to Sacramento.  As of now, they are still awaiting a decision of whether their son can return to the family as he fights his deportation case.  The words in the title of this post were spoken by Patricia, another aunt who would drive 8 hours from Riverside to attend her nephew’s court dates.  With the family’s perseverance and community support, we know this family will bring their son back. 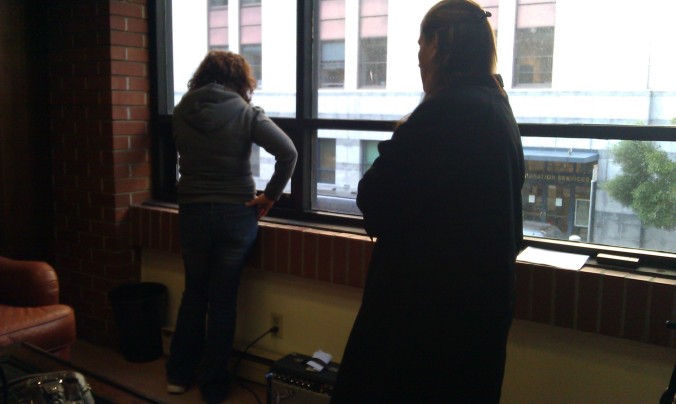 After four months in immigration detention, 13 year old Elias comes home.  After facing charges, he was placed on an immigration hold, and unlike other Bay Area counties, San Mateo enforces detainer requests regardless of age.  But because of his mom’s advocacy and supported by community, Elias is coming home to spend Christmas with his family.

A longer story on juvenile ICE holds is coming, but we wanted to share with you the moment that Patricia and Elias were reunited at the San Francisco Airport on Wednesday, December 21.

The Santa-Clara-fication spreads.  Last week, the San Francisco Board of Supervisors passed a similar policy to Santa Clara urging the City to limit cooperation with federal immigration officials and not spend county resources to do ICE’s job.  Great job to the San Francisco Immigrant Rights Defense Committee for pushing this forward, and to Supervisor Eric Mar for sponsoring the resolution.  We need more and more of our jurisdictions to turn the tide against the criminalization of immigrants.  Post by Charisse Domingo

The San Francisco Board of Supervisors yesterday (Tues/13) approved a resolution calling for the city to adopt stronger policies for resisting federal efforts to deport undocumented immigrants who live here. It is the latest move to support the city’s Sanctuary City status and counter the federal Secure Communities (S-Com) program, a new database that allows the feds to circumvent local policies protecting local immigrants who have been arrested but not convicted of any crimes.

END_OF_DOCUMENT_TOKEN_TO_BE_REPLACED

On October 21, 2011, just days after the Santa Clara County Board of Supervisors passed a detainer policy praised by many community members, legal service providers, and immigrant rights advocates as one that balances public safety, honors civil rights, and protects immigrants, County Counsel Miguel Marquez sends off a letter to ICE notifying them of our County’s official stance.  Click below to read the letter…. 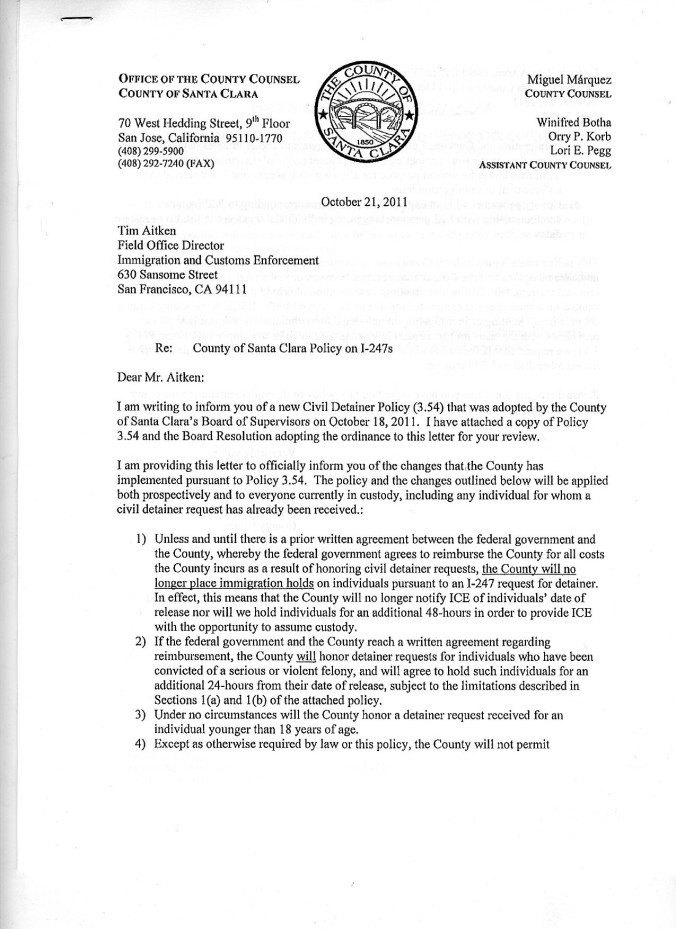